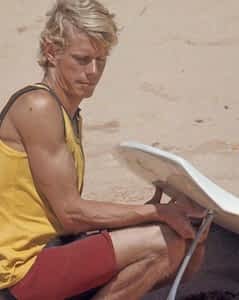 Midget Farrelly was the ‘first man’ to win the first official surfing world championship at Sydney’s Manly Beach in 1964, and dominated the sport throughout the decade. Midget was a ‘water baby’, craftsman, leader and visionary.

He grew up and lived in paradise on the Northern Beaches of Sydney. At age 14 he made his first long board and was nicknamed Midget due to his slight build. Age 17 Midget worked alongside Joe Larkin, Bob Pike and Barry Bennett at the home of surfing design and manufacturing in Brookvale, NSW. By age 18 Dave Jackman, Mickey Mc Mahon, Denny Keough and Gordon Woods figured in Midget’s industry education and influence.

In 1965 Midget took all the wood out of his boards, relying on the thickness of glass for strength. His first ‘stringerless’ prototype was successful in winning the 1965 Australian Championships at Manly. Midget’s very light board pulled tight turns packing more performance into the small waves.

In 1967 Midget introduced a V bottom design. It was only 8 feet long by 22 inches wide and heavily veed through the tail half. The board was specifically designed to ride waves less than head high. A new era of manoeuvrability in surfing dawned.

Midget was a statesman of the surf industry and a gentleman.