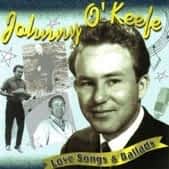 John Michael O’Keefe was born on 19 January 1935 in Sydney New South Wales. Johnny attended Christian Brothers’ College Waverley. During his journey he became an Australian music industry legend and in 1988 his name was included in the Australian Record Industry Association’s hall of fame.

Johnny’s music career began at school singing in the choir. He also learned to play piano. In September 1956 he and Dave Owens formed the ‘Dee Jays’ (Dave, Johnny). Their band became regulars performing on the pub dance circuit in Sydney.

After signing with Festival Records O’Keefe and the ‘Dee Jays’ released You Hit the Wrong Note Billy Goat, in July 1957 written by Bill Haley. Five months later O’Keefe released Wild One which he co-wrote. The song was an immediate hit and made him the first Australian rock’n’roller to reach the national charts. Shout followed in 1959 and She’s My Baby in 1960.

Despite his image as ‘The Wild One’, he promoted rock’n’roll as wholesome entertainment, claiming that it was one of ‘the greatest barriers to delinquency’. He aspired to be an all-round entertainer; two of his biggest hits were ballads, I’m Counting on You (1961) and She Wears My Ring (1964).

He was a pioneer producing and starring in early TV shoes including ABC’s Six O’clock Rock and ATN 7 Sing Sing Sing. Johnny’s song Mockingbird, recorded with Margaret McLaren, became a national hit in 1974.

Generous by nature Johnny helped raise funds for the Spastic Centre of New South Wales and other charities. He entertained Australian troops in Vietnam in 1969 and performed at a free concert in cyclone-devastated Darwin in 1975.

Johnny died of a drug overdose related to his bouts of depression in 1978. Passion often conflicts the heart with the mind.